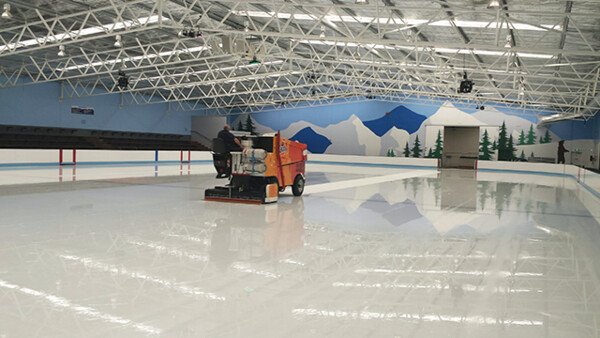 "Now, the snow dump’s sand filters only need cleaning out once a year instead of
every two months to remove lint, sand and debris"
says Steve Cornwell, Arena’s plant supervisor.

Setting: The second largest ice rink facility in the Southern Hemisphere
Situated next to Adventure World, overlooking Bibra Lake, a suburb of Perth, WA, Cockburn Ice Arena was opened in October 2015 with the sole purpose of providing a high-quality ice surface for all levels of skaters.

Preparing the ice surface for skating involves using a Zamboni ice re-surfacer. The machine works by shaving off the top layer of ice, which is then sucked up into the front of the machine into a bin. The machine then puts down a thin sheet of fresh water which freezes and forms a nice flat surface to skate on. The Zambonis can hold roughly two cubic metres of shaved ice (or “snow”) before they need to be emptied. 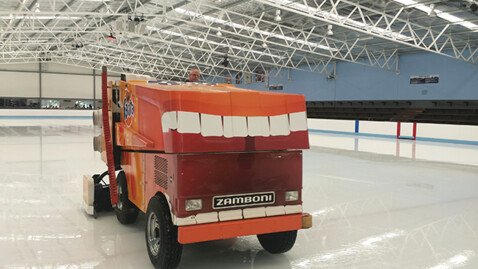 The ice is usually re-surfaced after each skating session, so with two Olympic sized surfaces and multiple sessions per day on each rink, on busy days up to 20 cubic metres of “snow” is removed from the ice surfaces.

At Cockburn Ice Arena’s old facility (decommissioned in 2015), and as is the case at most other ice rinks in Australia, this “snow” was just dumped outside in piles to melt and drain away. The management recognised that this was a huge waste of water – not to mention the energy used to freeze the ice – so it designed “snow dumps” inside the building. This allows staff to recycle all of the water that is taken off the ice, and also use the near freezing temperature water to assist in cooling the Chiller equipment that is used to keep the ice surfaces frozen.

Challenge: Minimising maintenance and streamlining the recycling process
Given the large surface area – each rink surface is around 1800m² in size – a considerable amount of clothing lint, dust, and debris is also picked up by the Zamboni machines and this would regularly clog up the filters in the snow dumps and cause problems with pumps and other equipment. Management also found that the tanks that held the recycled water were getting increasingly murky as they captured more fine dust and sediment. Previously, the Arena’s plant supervisor, Steve Cornwell, would have to physically jump in the “snow dump” tanks and wade around in near-freezing temperature water to manually clean out the old filters. This process ensured a constant flow of water for the recycling process. “It certainly wasn’t the most pleasant of tasks!” explains Steve. “The filters were getting clogged daily and when you’re working in water at that temperature, it doesn’t take long before you start losing the feeling in your extremities.” 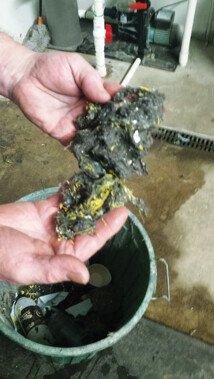 Debris captured from the ice.

“As lint was clogging up the lint pot in the pump, I also suggested Waterco’s Trimline Leaf Trapper, which is designed to capture the majority of the debris, whilst the MultiCyclones would collect some of the remaining, finer debris after the pump before going into the sand filter,” Ben explains. 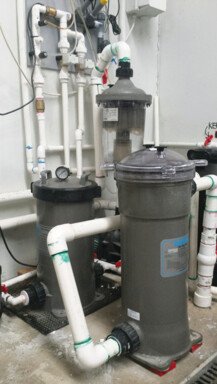 The Trimline Leaf Trapper’s 800 micron, large filter bag is made of high strength, durable nylon that allows a full flow of water with minimal resistance. Its holding capacity is approximately four times the usual leaf and debris holding capacity of a standard pool skimmer leaf basket. 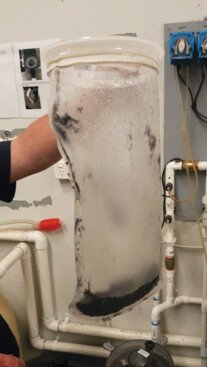 With no moving parts and no filter media to clean or replace, MultiCyclone’s prefiltration system is designed to capture up to 80 per cent of the incoming dirt load prior to the main filter. This significantly reduces filter maintenance while simultaneously reducing backwash water. It also eliminates backwashing by up to 40 per cent, extending the life of the filter. 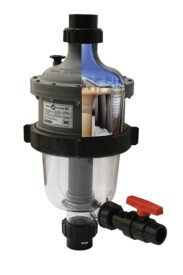 MultiCyclone is a pre-filtration device that works on
the basis of centrifugal water filtration.

Conclusion: A low maintenance solution for Cockburn Ice Arena’s maintenance staff
Since the system was installed in late 2016, Waterco’s filtration solutions have dramatically reduced maintenance time and water usage – the latter being crucial for a state that often experiences low rainfall and drought conditions.

“It was exactly what we were looking for,” says Steve. “With Waterco’s Trimline Leaf Trapper, I no longer need to jump in the icy cold snow dump and clean out the old pre-filter,” says Steve. “Now, the snow dump’s sand filters only need cleaning out once a year instead of every two months to remove lint, sand and debris, which the leaf trapper now collects. Also, backwashing filters that had to be cleaned daily are now done roughly once a week.”